Governments and enterprises in many parts of the world scaled up investments in innovation amid the massive human and economic toll of the COVID-19 pandemic, the Global Innovation Index 2021 showed, illustrating a growing acknowledgement that new ideas are critical for overcoming the pandemic and for ensuring post-pandemic economic growth.

However, the impact of the crisis has been highly uneven across industries, according to to a new GII feature, the Global Innovation Tracker. Firms with outputs including software, internet and communications technologies, hardware and electrical equipment industry and pharmaceuticals and biotechnology amplified their investments in innovation and increased their R&D efforts. In contrast, firms in sectors heavily hit by the pandemic’s containment measures and whose business models rely on in-person activities – such as transport and travel – cut back their outlays, the tracker showed. The GII 2021 shows that technological progress at the frontier holds substantial promise, with the rapid development of COVID-19 vaccines being the greatest example.

"This year’s Global Innovation Index shows us that in spite of the massive impact of the COVID-19 pandemic on lives and livelihoods, many sectors have shown remarkable resilience – especially those that have embraced digitalization, technology and innovation –", said WIPO Director General Daren Tang. “As the world looks to rebuild from the pandemic, we know that innovation is integral to overcoming the common challenges that we face and to constructing a better future. The Global Innovation Index is a unique tool to guide policy-makers and businesses in charting plans to ensure that we emerge stronger from the pandemic.”

In its annual ranking of the world’s economies on innovation capacity and output, the GII shows that only a few economies, mostly high income, consistently dominate the ranks. However, selected middle income economies, including China, Turkey, Viet Nam, India, the Philippines, are catching up and changing the innovation landscape.

Switzerland, Sweden, U.S., and U.K. continue to lead the innovation ranking, and have all ranked in the top 5 in the past three years. The Republic of Korea joins the top 5 of the GII for the first time in 2021, while four other Asian economies feature in the top 15: Singapore (8), China (12), Japan (13) and Hong Kong, China (14).

The geography of global innovation is changing unevenly

Northern America and Europe continue to lead the global innovation landscape as regions by far. The innovation performance of South East Asia, East Asia, and Oceania has been the most dynamic in the past decade. It is the only region closing the gap with the leaders.

However, only Turkey, Viet Nam, India and the Philippines, are systematically catching up. Beyond China, these larger economies have the potential to change the global innovation landscape for good.

“The GII shows that although emerging economies often find it challenging to steadily improve their innovation systems, a few middle-income economies have managed to catch up in innovation with their more developed peers", says Former Dean and Professor of Management at Cornell University, Soumitra Dutta. “These emerging economies, among other things, have been able to successfully complement their domestic innovation with international technology transfer, develop technologically dynamic services that can be traded internationally, and ultimately have shaped more balanced innovation systems”.

• Investments in innovation reached an all-time high before the pandemic with R&D growing at an exceptional rate of 8.5 percent in 2019.

• Government budget allocations for the top R&D spending economies, for which data is available, showed continued growth in 2020. The top global corporate R&D spenders increased their R&D expenditures by around 10 percent in 2020, with 60 percent of these R&D-intensive firms reporting an increase.

• The number VC deals grew by 5.8 percent in 2020, exceeding the average growth rate of the past 10 years. Strong growth in the Asia Pacific region more than compensated for declines in North America and Europe. Africa and Latin America and the Caribbean also registered doubledigit increases. First quarter figures for 2021 suggest even more vibrant VC activity in 2021.

• The publication of scientific articles worldwide grew by 7.6 percent in 2020.

“Among the key findings of GII 2021, changes happening among the top economies are quite remarkable. In addition to Republic of Korea’s spectacular jump (from 10th to 5th), the continuation of progress made last year by France (11) and China (12) are confirmed, as both are now knocking at the door of the GII top 10. Those three examples underline the continued importance of governmental policies and incentives to stimulate innovation. Altogether, COVID did not disrupt the trends identified in 2019-2020, as financing (public and private) continued to remain relatively abundant for innovative firms, even outside the health and bio-sciences fields,” says INSEAD Distinguished Fellow and report co-author Bruno Lanvin.

Global leaders in innovation in 2021 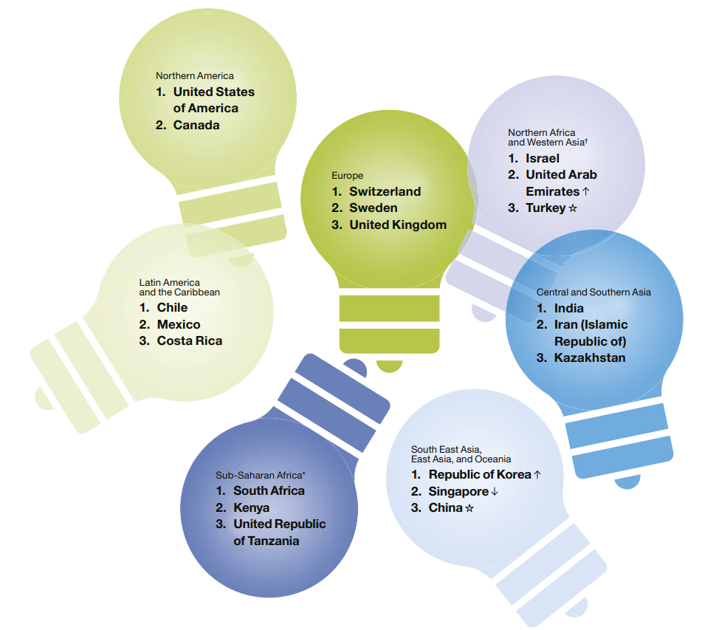 Northern America, composed of the U.S. and Canada, remains the most innovative world region. The U.S. keeps its 3rd place for the third consecutive year, and Canada goes up to reach the 16th rank.

The U.S. leads in key metrics such as patents by origin, the quality of its universities and the impact of its scientific publications and in R&D intensive global companies. It also hosts the largest number (24) of top science and technology clusters in the world, led by the San Jose-San Francisco cluster. Canada tops in venture capital deals and joint ventures and strategic alliance deals.

Sixteen of the GII leaders in the top 25 are European countries, with seven of them ranking in the top 10. Switzerland remains the world’s leader in innovation for the 11th consecutive year, and together with Sweden (2) has remained in the top three of the innovation ranking for more than a decade. Switzerland, Sweden, and the United Kingdom (4) have ranked in the top five in the past three years. A total of 10 European economies go up the ranks this year, with France (11) and Estonia (21) progressing notably. Finland (7) leads worldwide in rule of law. Sweden leads in patent families and coleads in international patent applications filed via WIPO’s Patent Cooperation Treaty (PCT) alongside Switzerland, Norway (20) tops in ICT use and expenditure on education, while the United Kingdom leads in the quality of its univerisities and the impact of its scientific publications. Switzerland is the regional leader in innovation outputs, and in particular in patents by origin, and intellectual property receipts.

The innovation performance of the South East Asia, East Asia, and Oceania region has been the most dynamic in the past decade, closing the gap with Northern America and Europe. Five economies are world innovation leaders: the Republic of Korea (5), Singapore (8), China (12), Japan (13), and Hong Kong, China (14).

Since 2013, China has moved steadily up the GII ranking, establishing itself as a global innovation leader while approaching the top 10. It boasts 19 of the top science and technology clusters worldwide - with Shenzhen-Hong Kong-Guangzhou and Beijing in the 2nd and 3rd spots, respectively.

The Republic of Korea went up notably in innovation results and in particular in indicators trademarks, global brand value, and cultural and creative services exports. Malaysia (36) has been hovering close to the top 30 for 11 years but has yet to reach the mark.

India becomes 2nd in the lower middle-income group. It continues to hold world leadership in the ICT services exports indicator, and holds top ranks in other such as domestic industry diversification and graduates in science and engineering. Bengaluru, Delhi and Mumbai are in the top 100 science and technology clusters.

Uzbekistan is among the most notable movers, gaining 7 places to reach the 86th rank. The innovation performance of Kazakhstan (79) and Tajikistan (103) improved in 2021 but has been less steady over the past years. Tajikistan takes the 2nd place among the low-income group economies.

Israel (15), Cyprus (28), and the United Arab Emirates (UAE) (33) are the top three economies in this region. The UAE has moved up the rankings since 2018. Cyprus leads worldwide in ICT services imports and exports and mobile app creation, while Israel leads in R&D expenditures, venture capital deals and PCT patents. The UAE ranks in the top 5 in the number of researchers in businesses and R&D financed by the private sector.

Turkey (41) makes a big jump into the top 50 and continues to systematically catch up. It also hosts two leading science and technology clusters, Istanbul and Ankara. Eight other economies in the region move up the ranks, including Oman (76), Egypt (94), and Algeria (120).

Chile (53) ranks first in the region, followed by Mexico (55) and Costa Rica (56). Only Chile, Mexico, Costa Rica, and Brazil (57) are in the top 60. Mexico aside, few have consistently upped their ranks over the past 10 years.

Eleven economies in the region go up the ranks, with Argentina (73), Paraguay (88), and Ecuador (91) making the most progress. Brazil goes up 5 spots and achieves its best rank since 2012; and together with Peru (71), it overperforms in innovation for the first time ever. Brazil also hosts the only Latin American science and technology cluster in the top 100, with São Paulo ranked 66th.

Sub-Saharan Africa is the region with the largest number of overperforming economies on innovation (6), with Kenya holding the record of outperformer for eleven consecutive years.

The Global Innovation Index 2021 (GII), in its 14th edition this year, is published by WIPO, in partnership with the Portulans Institute and with the support of our corporate partners: the Brazilian National Confederation of Industry (CNI), Confederation of Indian Industry (CII), Ecopetrol (Colombia), and the Turkish Exporters Assembly (TIM). In 2021, an Academic Network was established to engage world-leading universities in GII research and support the dissemination of GII results within the academic community.

Since its inception in 2007, the GII has shaped the innovation measurement agenda and become a cornerstone of economic policymaking, with an increasing number of governments systematically analyzing their annual GII results and designing policy responses to improve their performance. The GII has also been recognized by the UN Economic and Social Council in its 2019 resolution on Science, Technology and Innovation for Development as an authoritative benchmark for measuring innovation in relation to the Sustainable Development Goals (SDGs).

Published anually, the core of the GII provides performance measures and ranks 132 economies on their innovation ecosystems. The Index is built on a rich dataset – the collection of 81 indicators from international public and private sources – going beyond the traditional measures of innovation since the definition of innovation has broadened. It is no longer restricted to research and development (R&D) laboratories and published scientific papers, and rather, is more general and horizontal in nature, including social, business model and technical aspects. For each economy a one-page profile is produced in which that economy’s performance on all indicators is recorded, relative to all other economies in the Index. The economy profiles also highlight an economy’s relative innovation strengths and weaknesses.

The GII 2021 is calculated as the average of two sub-indices. The Innovation Input Sub-Index gauges elements of the economy that enable and facilitate innovative activities and is grouped in five pillars: (1) Institutions, (2) Human capital and research, (3) Infrastructure, (4) Market sophistication, and (5) Business sophistication. The Innovation Output Sub-Index captures the actual result of innovative activities within the economy and is divided in two pillars: (6) Knowledge and technology outputs and (7) Creative outputs.

The index is submitted to an independent statistical audit by the European Commission, Joint Research Centre. To download the full report visit: www.globalinnovationindex.org.

Framework of the Global Innovation Index 2021